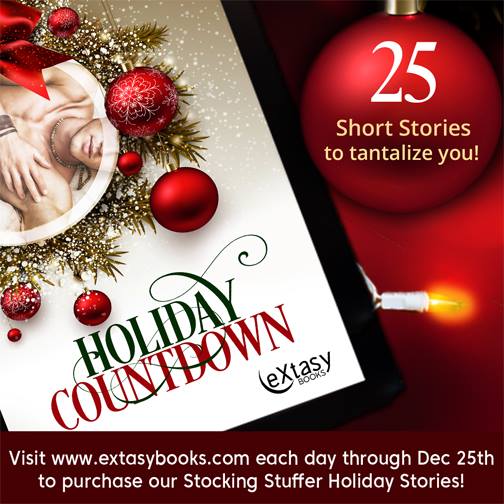 http://www.extasybooks.com/
The Number in the Christmas Ball is the date of each book release. 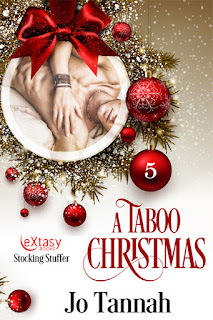 Posted by multitaskingmomma at 7:21 PM No comments:

Forbidden food. Family drama. A lot can happen in the three days before Christmas.

When Zachary Parker’s grandparents come to town unannounced, his anxiety goes through the roof. His grandmother had always treated him like a child, but she’d also always known Zach was gay. Would she readily accept his relationship with a much older man?Tristan knew from the start his relationship with Zach would be met with a lot of doubt and scrutiny from others. With the arrival of the grandparents, he would have to put his best foot forward. His best friend, Jon, Zach’s father, feared his in-laws and avoided them at all cost. That should have clued him in, right?With Christmas Eve just around the corner, Zach’s grandmother insists on a traditional Noche Buena feast, putting Zach and Tristan directly in her path. Then there’s Zach’s secret present.Will Tristan and Zach’s forbidden love find a happily ever after this Christmas Eve? 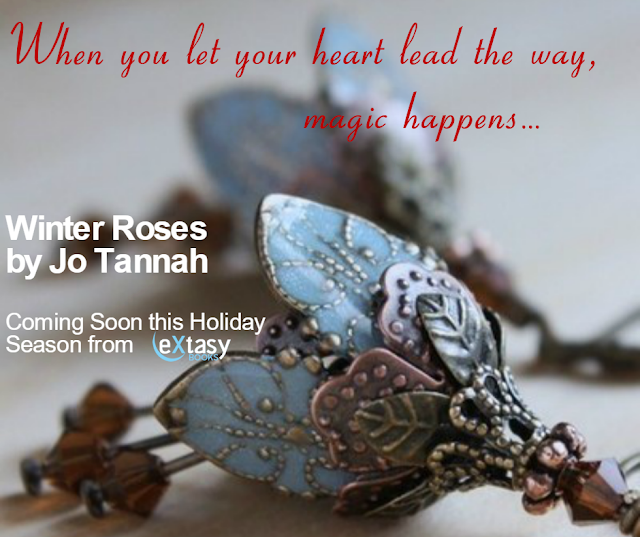 Moving In (A Taboo Story)

Note: This is a deleted scene from A Christmas Taboo. Written in Tristan Maxfield's POV, this has  been rough edited and there may be some flaws in the timeline.

They were in the new apartment. Tris watched as emotions raced across Zach’s face. Doubt, excitement, and a touch of hope. A whole lot of hope. He read it in the way Zach bit on his lower lip, the way his fingers trailed across the granite island in their kitchen. When Zach suddenly turned, leaned and placed a short, sweet kiss on his lips, Tris’ heart stopped as a sudden need rushed through him.
“What do you think?”
Zach threaded his fingers through his hair and he felt the tug on his scalp. He bent down closer until their lips hovered over each other. Zach’s unique scent hit his nostrils, setting something inside him on fire. He recognized the heat that had been simmering inside him since he’d first laid eyes on Zach after his five years absence. His heart jumped, and his hands moved down Zach’s back. Touching, kissing, their mouths locked onto each other in a deep, penetrating kiss. Tris couldn’t get close enough to Zach, he didn’t’ dream of breaking away from him for a second.
As his palms slipped under Zach’s shirt, he felt the bare, heated skin. Soft skin, hard muscles, just like he’d remembered. Their kiss deepened, sending his blood burning through his veins. Tris couldn’t wait to get Zach’s clothes off.
With a groan, he felt Zach push on him and he moved willingly. Before he knew it, Zach had tugged his shirt out of his waistband and pushed it up his chest. His lips went to the exposed skin before him, tongue licking him over his nipples before taking a bite on them as his hands took to unsnapping his jeans.
Trist got lost in the frenzy of Zach’s hands and mouth. The heat that never failed to overwhelm them exploded into Tristan, consuming him with need. Reaching up and turning Zach’s face toward him, he kissed him as he pushed back in the direction of the island. Zach grunted softly and Tristan looked down to see his back against the island’s edge. Taking a step back, he placed a hand in the middle of Zach’s chest and pushed him back to lie on the island.
Zach didn’t voice a protest, instead he went willingly and spread his thighs when Tristan moved between them. With trembling hands, Tristan unfastened Zach’s jeans and shoved impatiently to open them. With a rough, indrawn breath, he saw Zach wore no underwear. Without missing a beat, he reached and pulled on the hard length, eliciting a gasp from Zach. Looking up he watched as Zach writhed on his back, his eyes closed, his mouth slightly open as he took in, harsh, passion-filled breaths.
Tristan looked at the treasure in his hand, bent down, and took a taste. 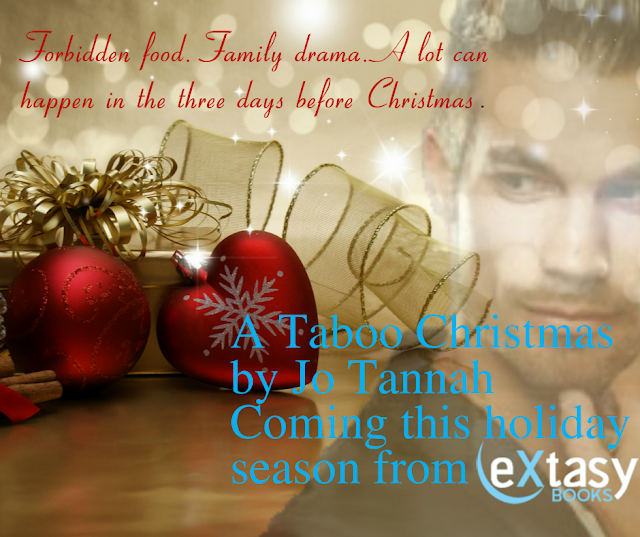 Posted by multitaskingmomma at 1:01 AM No comments: