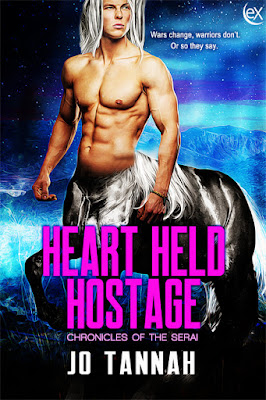 
The Serai have won the galactic war. Tasked to take charge of the human assimilation into their herd, Prince Jytrerd never thought to find a mate among the human slaves. He learns that the human Captain Ian McCaskey is his potential breeder and saves his life. Because they are sterile, the Serai need the genetic materials their captives give to father their younglings. But Ian resists, and it doesn’t take long for Jytrerd to realize that for their relationship to flourish, the two of them must connect on a deeper level. It is now up to Jytrerd to make Ian understand that he is valued above all others.

Save 10% when you buy from eXtasy Books

Posted by multitaskingmomma at 7:30 AM