I've got a new Series!

Yes, I know, I hear you. I've written several series already, so why create another one? Well, have you ever heard about plot bunnies and how they can hop into your mind and drive you crazy unless they got your full attention? The Serai came out of nowhere and kicked me in the head without my realizing it. I tried to ignore them, truly, I did. But, alas. It wasn't to be and so they were borne.

Confession. This little detail, my pals Ann Mickan and Lynn Michaels know for sure and true. I wrote Heart Held Hostage in 17 hours. Well, not the full story, obvs, but the draft. A draft of 18k words that morphed in under three days into what it is now listed as: 29834 words. Wow, and that expansion came up because someone found a plot hole the size of Arkansas and I had to cover it up. As I'm not about to stop writing without going around the bush and build up steam, I ended up adding the 10k or so words :D That made me happy as the result is what you are about to read.

You are going to check it out, right? I mean, this IS my very first mpreg story ever written. I love the trope, I love the genre, call me weird, but I thought I could never do it. Well, I did and you should check it out :D *unrestrained self-promotion here*

So, who are the Serai?

Before I go into details, let me share with you my awesome cover by the fantabulous Angela Waters of eXtasy Books. Ooh, and check out that brand new logo over at the upper right-hand corner. It's a gorgeous logo all eXtasy Books are going to be displayed on all their book covers from now on. Divine Destiny has its own logo, too. Now you don't ever have to wonder ever again what publisher released my books. That logo should say it all :D 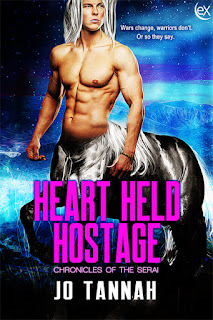 You can PreOrder HHH HERE

The Serai have won the galactic war. Tasked to take charge of the human assimilation into their herd, Prince Jytrerd never thought to find a mate among the human slaves. He learns that the human Captain Ian McCaskey is his potential breeder and saves his life. Because they are sterile, the Serai need the genetic materials their captives give to father their younglings. But Ian resists, and it doesn’t take long for Jytrerd to realize that for their relationship to flourish, the two of them must connect on a deeper level. It is now up to Jytrerd to make Ian understand that he is valued above all others.

Known collectively as Serai, these are an all-male species who inhabit the Serain Galaxy. They are a highly civilized race who live in herds.  The bi-pedaled ones are peaceful and make up the intellect of the species. They enjoy a highly evolved technology in agriculture and science. The quad-pedaled ones are the warrior caste, the protectors of the Galaxy. Ruled by an Imperial family, the Serai will protect their own to the last warrior. The Serai is also sterile, but they do have brood pouches to enable them to carry their young. For genetic material, they use captives to fertilize their seed and have the ability to segregate to whatever caste or function they want them to be. 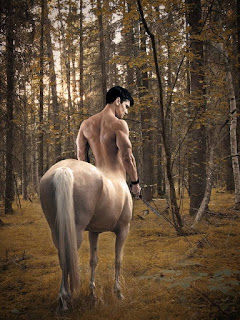 The Serai may look like the mythological centaurs, but they are not. They are a complex species whose primary aim is to live in a peaceful and profitable herd. Invaders are not welcome and will be destroyed. When the humans came to destroy, there was no hesitance to their retaliation. It didn't take them long to subdue the humans and enslave them. The repercussions of the enslavement are what makes up the stories of The Chronicles of the Serai.

I truly hope I've piqued enough of your curiosity. Yes, there is mpreg in these stories, but it is not the human men who get pregnant, although they are necessary to the process. Primarily, this series is about romance and acceptance. There can be triggers, but I cannot avoid that. The tag of #mpreg should be enough to warn future readers that there is something here that may not be their fancy. Also, there is enslavement here and the brutality of the repercussions of war. I think I did a good job in gentling the human situation in these stories.

How did this group of merry men come about? What triggered the inspiration? This pic. This. OMG, I just right about fell off my chair when this popped into my field of research. It was totally unrelated and yet, oh man. Can you blame me for falling in love?

Posted by multitaskingmomma at 9:28 PM