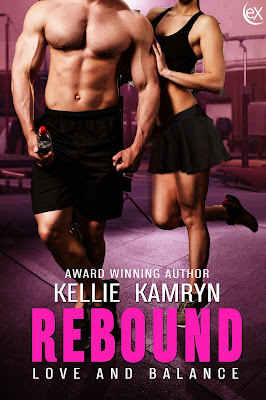 BLURB:
An award-winning choreographer faces her biggest loss when she’s teamed up to coach with her former lover at a gymnastics camp for Olympic hopefuls.

Claire LeMay is at the top of her game—she’s head coach for a top gymnastics facility in Winnipeg, Manitoba with her gymnasts winning awards for her outstanding choreography. Now her biggest challenge is to coach alongside the man she’s avoided for three years after rejecting his offer of coaching under his command at his club in Ottawa, Ontario.

After sinking every penny of his inheritance into his state-of-the-art gymnastics facility, Justin Black has achieved his dream. But even with hundreds of members and well-trained coaches, when Claire’s presence invades his space, he realizes she’s the one thing that’s missing. Clueless about why she didn’t accept his earlier job offer, he is determined to discover why she turned him down.

Will they be a rebound romance, destined to repeat the same old routine, or can they choreograph a new one?

Chin propped in her hand, Claire gazed out the window and watched the rain fall, taking slow, conscious breaths. She held up her wine glass in a toast. “Thank you for this. It was very nice of you to invite me to dinner.”
“You’re picking up the cheque.” He winked at her in jest.
She batted her eyelashes at him. “Well then, perhaps I will make sure I order the most expensive thing for dessert.”
Eying each other over the rim of their wine glasses for a moment, they both opened their mouths to speak at the same time. She gestured for him to go first.
“Why did you walk out on me?” he asked.
Caught off guard by his bluntness, she cleared her throat. “You don’t start with anything easy, do you?” She asked a frank question of her own. “In that case—why didn’t you come after me?”
He expelled a breath and dragged a hand through his hair. “Is that what you wanted?”
“To be honest—I don’t know what I wanted. It all seems like so long ago and so childish now. I thought you loved me, and I thought you understood, but I suppose you can’t understand what I never put into words.”
Justin set his glass on the table. “I thought we had plans together, dreams together.”
She released a slow breath. “Those were your dreams, your plans—not mine.”
He appeared confused for a moment, then he nodded in understanding. “Ah, I see. Thus the things you didn’t put into words.” He sighed. “I suppose it’s fair to say we were not on the same page, and may have been in fact, in different chapter’s altogether.”
She nodded. “You always talked about your plans, what you wanted to do, how you were going to do it—and I was happy for you. But I was twenty-two, Justin, and still felt like a teenager. I didn’t know how to tell you that I wanted to be head coach of my own gym, not just live in your shadow.”
His brow crinkled in concern. “I wouldn’t have asked you to do that.”
“But I didn’t know that. And I was far too afraid of disappointing you to say anything. A habit I’m only beginning to break.” She took another sip from her wine glass, then set it on the table.” Tears filled her eyes. Anxiety squeezed her heart. What if he didn’t understand now? Did it matter? She’d managed to build a life without him up to this point.
“Are you okay?” he asked, his tone gentle.
“Yes.” She sniffed. “I consciously work through being anxious all the time.”
He frowned and stared at his cutlery. Then he fixed his gaze on her and reached across the table for her hand. “Tell me now. Tell me everything. I’m listening.”
Tears dripped down her cheeks, and she pressed her fingertips to her lips a moment. “I don’t know where to start.”
He gave her hand a squeeze. “Start with why you left. Tell me what you wanted out of life. Tell me why I lost you and if I will ever have a chance of getting you back.”
Claire nodded at him. “I ask for one thing—please don’t be angry.”

His hands raked up her rib cage to slither inside her sports bra. Her chest rose and fell in his hands, and she lifted her arms over her head, letting him remove her bra.
Caressing her bare shoulders, he nuzzled her neck, nipping her skin, feeling the shivers he sent down her spine. He grasped the hem of his shirt and ripped it over his head, flinging it to the floor. Then he took her face in his hands, his hungry mouth devouring hers. But he wasn’t the only greedy one. She met every swipe of his tongue with one of her own. He felt himself drowning in her taste, her scent, her everything.
Her nimble fingers traced each of his abdominals before outlining the muscles of his chest. He exhaled a ragged breath.
“I feel like it’s our first time again,” she whispered.
“But it’s not.”
Her pupils flared at the low growl in his voice, and a sexy smile curved her lips. “You’re right—it’s not.” She ran a fingertip over the skin at the top of his pants, then slipped her fingertips around his waist and tickled his spine with her fingertips. “I remember a thing or two about how to make you moan my name.” At that, she pressed the heel of her hand into his rock-hard cock.
“Claire,” he rasped. The vixen before him could have her way with him. Her hot, wet mouth brushed across his chest, and she rolled one of his nipples between her thumb and forefinger. His abdominals tightened and he sucked in a breath, feeling her smile against his pectoral.
His arms encircled her. The heat from their bodies all but melted the two of them together. Her hands trailed down his ribcage to the waistband of his pants. Sliding her hands into his waistband, she grasped his length. A breath hissed in through his teeth, and she brought her hand down lower to cup his balls. Her tongue flicked over his nipples until they beaded.
“I thought I’d never be with you again,” she moaned.
“But you are, love.” He crushed her to him. Her hands slipped to his back, and her mouth opened for him, his tongue sliding around hers at the invitation. They rubbed up against each other, the combination of soft skin and hard muscle a potent aphrodisiac.

Bio:
Winner of the RONE (Reward of Novel Excellence) Award for Best Erotica 2012, Kellie Kamryn has many 5-star reviews from sites such as Night Owl Reviews for her work in contemporary romantic fiction. In 2013, one of her novellas was nominated for Best Novella for the RONE Awards. In 2011, she presented a motivational workshop at the Moonlight and Magnolias GRWA Conference, and offers a writing workshop for authors – A Novel Creation – since 2015.
All of Kellie’s books contain a lot of heat balanced with an abundance of Heart. With 25 books now published to her credit since 2011, most days she can be found channeling her heart’s desire into writing stories and poetry that sweep readers away into other worlds.
When her muse requires a change in scenery, she funnels her creative energy into bringing many a tale to life through her work as an audio narrator and actor. And when her body demands attention, you can find her in the gym training gymnastics coaches, or training and co-teaching Baguazhang (Bagua) workshops and classes for self-defence to women/families, and for health and healing to individuals of all ages and abilities.
Readers are welcome to join her on any of her social media sites! It’s the first place she mentions contests, articles and much, much more! Come join in the fun!
Kellie is also a former columnist for Evolved World, now writing for The Aquarian Online, a local print and e-zine dedicated to inspiring and bringing enlightenment to individuals.


Follow the links to check out her other writing.