Earth is a cesspool of poverty and disease ruled over by one government, the World Leadership Organization, known as WLO. They will do anything to protect the wealthy, including sanction and fund the Institute—a highly classified facility that experiments on children and babies, then trains them to become emotionless killers.

Ripped from their families, sold, stolen, or kidnapped off the streets, these children and babies become the tools of the Institute and WLO to eliminate those that stand in the way of furthering their intergalactic agenda.

They are the Veiled Eliminators.

We are unique. We are the best. There is no one on Earth like us, and there never will be. We will succeed. We are strong beyond belief. We are the eliminators, and no one can touch us. 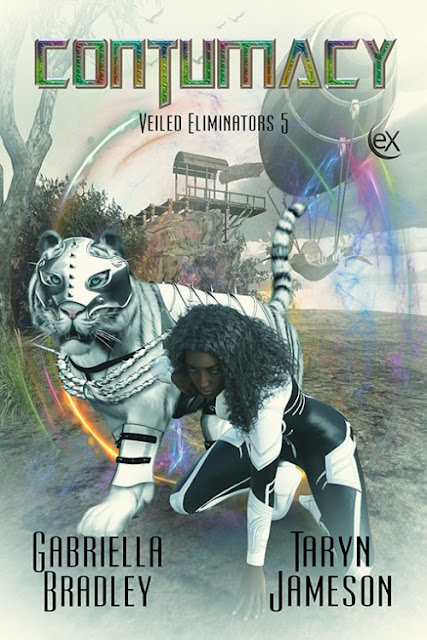 Turn about is fair play when death is the hand you have been dealt.

Thirty-three has no past—at least none that she can remember. Raised by the Institute from infancy she has been through hell and back due to a training incident that took her limbs and almost killed her.

Paired with her cybernetic tiger, Belle, Twenty-three is selected to eliminate the terrorist, Dominic Durant, and his men, and regain control of the refueling station on the planet Zahiria. Things go awry when instead of following orders meekly, she retaliates against the one man she hates most.

Behold the portal.” Schultz gestured at the monstrosity with pride.


She almost snorted. My escape to freedom? That thing? It looks like an oversized ugly picture frame.

They led her to it, then Rob appeared with Belle on a leash. When the big cat saw her, she pulled free and bounded toward her. Thirty-three bent and kissed her on the nose. Belle was wearing her metal armor. Good. She hated the thought of anything happening to her sweet friend. The cladding would protect her most vulnerable body parts.


Schmidt touched her arm, and when she turned to face him, he handed her a small dagger while throwing a furtive glance at Schultz. “WLO wants indisputable proof that the terrorists have been terminated. We cannot allow a phaser, as their bodies would be disintegrated but I refuse to send you completely unarmed. Good luck, Susan.”


“Thank you, sir.” Susan gazed down at the knife. The hilt fit perfectly in her hand, the blade almost four inches long and the edge looked razor sharp. How incredibly magnanimous of you, asshole. It would have been much simpler to use a phaser.

She increased her chances of being caught by leaving a trail of bodies in her wake. She sure as hell wouldn’t order Belle to attack a human to make it look as though an animal mauled the terrorists. The tiger had never been fed raw meat. One taste of human flesh and blood could turn Belle into a killer. If that happened, the big cat would have to be put down. Fuck that.

“Are you ready?” Schultz drew close to her, making her feel crowded.


“Yes.” Susan tried to ignore his nearness and looked at the grey oval,  which was now glowing.


In the center, a mass of what resembled mercury, swirled and flowed, then merged with colorful darts shooting across it. Rob had left, and Schmidt went to stand behind the glass partition in the computer room, leaving Schultz standing beside her. Schultz placed a hand on her arm, lightly caressing her. That feeling of nausea pooled in her belly. She could almost read his thoughts by the look on his face.


“Such a delectable body. It is a shame that you will no longer be with us.” He dropped his hand, an imperious smile on his face. “Take Belle and step into the portal.”