Old Men In My House: A True Tale of Getting Pranked by Supernatural Beings

Growing up, I lived in a huge house. It wasn't old, but the land it stood on was known for its supernatural dwellers. My grandparents didn't believe in such things, especially my grandfather who was a well-educated man. My grandmother didn't believe in such things either. Although I wondered how she knew all the tales and never hesitated to use them as an arsenal against us naughty children. My father was different. He loved to tell tales of the supernatural, most of which were based on his own experiences. If you are familiar with my Hidden Series, those are just samples of the tales he told me as a child. And I used to love listening to him, especially in the dark of too-hot nights that made sleep elusive. So, I guess you can say that as I grew up, the supernatural was fact. And this is where my tale begins. 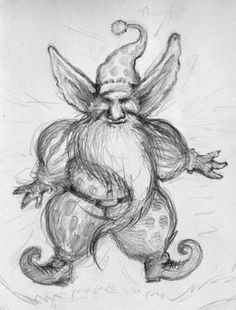 In the house I grew up in, I had my own room. We all did. Each room had its own en suite. Compared to the other rooms, mine was the biggest room. And the most active in the supernatural.

As a young girl, I was seen playing with friends who were never there. Things moved around. I never felt scared. Guests would come and stay with us, only to leave a day or two later never wanting to come back and stay in the room. Should they return, they always requested staying in another. I didn't mind. I liked things the way they were. You see, I had my friends. There were three of them. All of them were my guardians who liked to prank me by hiding things. If things went too far and I cried, the items would reappear and things would be right.

I would describe my friends as about three to three and a half feet tall, had long, black beards, funny, tall hats topped with a jingling bell. I would always see them in the periphery, never full on. They would run about the room causing my dogs to chase after them. Sometimes I would hear them giggling and their long nails scraping on the wooden floor. Same as my dogs. And my dogs loved playing with them. When I got married, they disappeared. Once in a while, I would go home and enter my room and feel nothing. It would feel empty. My friends were gone. I left the city for over a decade but when my father died followed a few years later by my mother, I came back.

My house is of new construction, but the land was once agricultural and around here, tales of the supernatural are rampant. Weirdly, I never felt anything strange or malevolent. I always felt confident and safe. Until one night. On the fourth year of our moving here. My mother died and I, along with my brothers, divided the property between us three. Most of what I got to take home were my stuff from my old room.

Around six months ago, things became strange in this new house. Nothing bad. Nothing malevolent. In fact, I felt relaxed and confident. All this despite my getting sick and staying in bed most of the time. One night, I woke up to a strange noise. That of nails scraping the tiled floor, as though there was something running around in my room. I focused on the sound and identified three separate areas the sounds were coming from. At first, I thought my dogs were playing but after feeling around my bed, I felt the sleeping forms of the three dogs sleeping with me at that time. I looked at my doll, Beatrice, and saw her sitting on my shelf. It wasn't her. It would never be her. It was then I realized that the sounds I was hearing were those of my friends. Without thinking about it, I said, "Shush. Be quiet. I am trying to sleep and I am not feeling well."

Those of you who have children, are you familiar of that feeling when your kids are caught red-handed and they are quiet and slink away? Even though you don't see them, you feel that atmosphere of embarrassment, disconcertment, and remorse? That feeling was so strong, I almost laughed out loud. And that was the end of it. Now and again I would hear them, and in the periphery, I would see them. My dogs run around and play with them.


Earlier today, I was focused on finishing my paranormal shape-shifter tale of romance and erotica, and my eldest daughter came in and asked for the keys to my car. I hesitated to give them over as those never leave my bag. But she needed to enroll and I was too busy finishing my overdue novella. I told her to go ahead. Five minutes later, she still hadn't found the keys. Frustrated, I went through my bag myself. Lo and behold. NO KEYS.

ONE HOUR LATER: the whole house was upended and still no keys.

The good news was that she found the spare in my hubby's desk and got to go to school. While she was out, I was frantically searching for the keys to no avail.

They were truly lost and I was super mad.

When my eldest came home, the good girl that she was decided to go every single inch of the house. unfortunately, she never found the keys.

I was cutting up ingredients for the stew we were going to have for dinner and I just blurted out what I normally did as a young girl when my things got lost.

"You, my little *kama-kama. Pay attention. I hope you give back my keys soon. If not, you will surely feel my wrath."

And I went on making dinner.

Two hours later, my hubby and my younger daughter came home and searched high and low for the keys. They upended everything, including my bag that had been upended and searched several times. Nothing.

In desperation, my younger daughter picked up my bag to go upstairs. Through the window to the garage where my car was parked, there came a distinctive click of doors unlocking. We looked at each other and stared at my younger daughter. She looked at the bag, upended it in front of us all, and found no keys. Putting everything back inside, she took the bag out to the car. The doors locked. Unlocked. Locked. Unlocked. Coming back in, my younger daughter silently hands the bag over to me and I physically upended everything on to the coffee table. The first item to fall were the keys to the car. Silently, wordlessly, I placed everything back inside my bag and we just stared at it.

My younger daughter then said: "Well, I guess our old men are up to their usual pranks. They better not do this again or they will feel my wrath."

*A dwende, or 'old man on the mound' is a dwarf creature who lives in the woods, in an anthill or old houses in remote areas. The dwende resembles a very small, old man with a long beard and they love to wear big hats.

These tiny creatures show themselves only to a few people, often when they seem to like you. Some dwende live in an old house. It is believed that they often shows to children and play with them. It is often told that they live in a paradise full of gold. Dwende is famous for hoarding things and it is often said that if you have lost something from your house, it is possible that it may have been taken by a dwende. But don't worry!  It will show up by the time you stop looking for it.
Posted by Jo at 8:55 AM