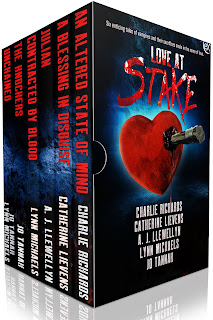 I am excited to announce that I will be a part of the Love At Stake Collection from eXtasy Books with not one, but TWO! stories. The Knockers is written solely by me, but Unchained is co-authored with Lynn Michaels. It was an incredible journey with a lot of behind the scenes going on before we could finally announce this today.
Watch this spot for more details.

Click to read what the stories are all about. 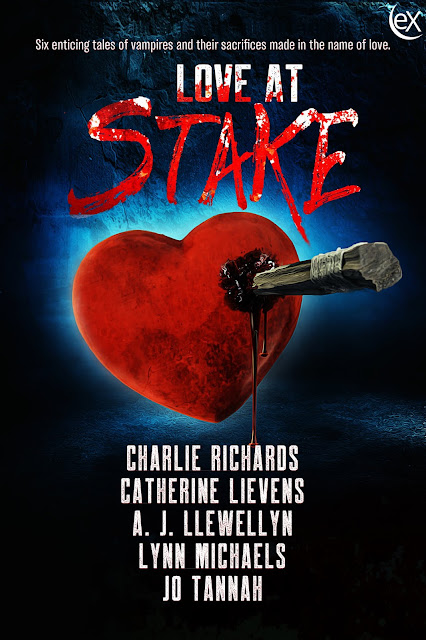 The Knockers
by Jo Tannah

Can a vampire be mastered?

On Thosolla, a world where humans live in peaceful co-existence with the endemic race, the Reter family have ruled and exacted justice for over a millennium. When a beloved prince is found dead, along with his newly wedded husband, both human and Thosollan point accusing fingers at The Knockers. Ezmet Reter had been enjoying a quiet time with his human lover Francis on a private island on Earth when word reached him of a rebellion on Thosolla. The reason? Supposedly, The Knockers had exacted punishment on his beloved cousin, Ezra, who he thought had been on his honeymoon with his husband of two weeks. Legend has it The Knockers were a trio of vengeful creatures who neither forgave nor spared anyone who dared break the sacred agreement between Thosollans and humans. Feared for their uncanny ability to hunt down the guilty, no one knows of their origins or the true extent of their powers. The whole situation perplexes Ezmet for the last recorded incident when The Knockers had wrought their vengeance had been five hundred years before. Worried, he journeys back to Thosolla to hunt down the killers. When Francis’ life is endangered back on Earth, Ezmet’s anger unwittingly unleashes the wrath of The Knockers.

Vampires are on the brink of extinction. The remaining few are kept as exotic pets, prized for the aphrodisiac qualities in their blood.Yas had been specifically bred and born in a cage and knows no other life. As he reaches maturity, his physical needs become harder to meet.Hunter8279 is a cyborg, genetically altered to hunt and control vampires. Everything that he’s been programmed to be gets scrambled when he sets eyes on the vampire he has been hired to watch over. Now, Hunter’s only mission is to free Yas from captivity.When Yas and Hunter find freedom, life is not happily ever after for them. Yas’ master refuses to let him go without a fight.