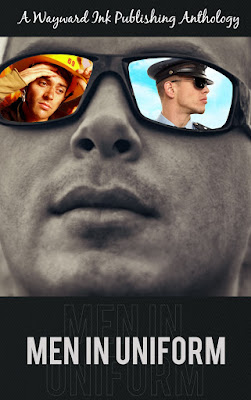 Like your boys in blue keeping the… peace?Hot firemen dealing with… heat?Naval Officers getting in way too… deep?Perhaps you have a ‘thing’ for marines…Or do you prefer your Men In Uniform to belong in the future?Another galaxy?Another time?Wherever your love of a uniform leads you, MEN IN UNIFORM has something for you.

STORIES INCLUDED
Issue No. 1 by Eric Gober
The Pinkerton Man by CJ Baty
Mission: Protect the Ex by Alina Popescu
A Spark In The Shadows by Kassandra Lea
His Heart Held Hostage by Asta Idonea
The Emperor's Slave by Eddy Lefey
Yes! Yes! Yes! by Lily Velden
The Firefighter and the Marine by Jim Dunaway
Blue Knight by Carol Pedroso
The Royal Guardian by Jo Tannah


This one was so enjoyable. I’m a sci-fi/fantasy fan. This story has space influences, which include self-aware AI,  and freaking symbiotic dragons. Also, there are well-delineated time jumps, something I also enjoy. The character development is impressive. The storytelling is inspiring. The world building is breathtaking. The romance and sex scenes are wonderful. Read this. It’s all I can say. Well I could say more, but I won’t. Just read this.

The characters are well rounded and have interesting back stories. We come to know and feel for them. The young prince’s story was very well written and held my interest. And I can’t go into that without spoiling the enjoyment for the reader.As a reader you want to know more about this world, its inhabitants, the history of that world and its future. There’s a mixture of science fiction and fantasy combined with rich almost folkloric story telling.This story doesn’t belong in an anthology but fleshed out as its own series of books—there is that much there that’s good and new.I, personally like the way Jo Tannah has with words. The smooth flow of the words is especially evident in the love scenes which are extremely well written.

This is a love story with different levels, and the relationship between the prince and the hatchling is an extremely clever idea.  I’ve been a reader of science fiction for many decades, and can usually see things coming.  However, this idea took me by surprise.